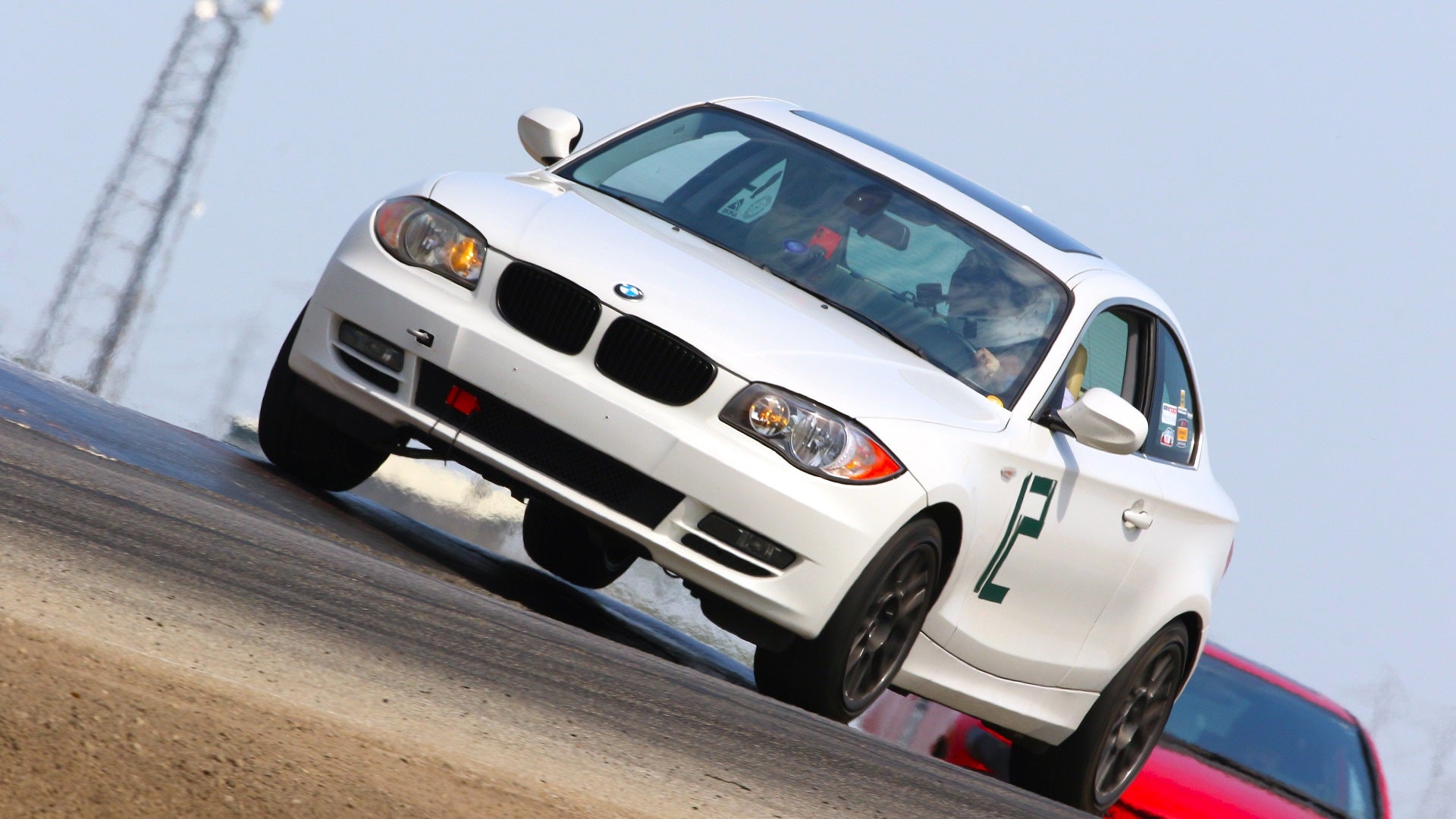 A few weekends ago I rode my third track day with my BMW 128i. The day turned out to be quite successful, as some changes to my riding and set-up got me onto the podium in my first time out in a series of time trial challenges. More importantly, I set a new personal best of 2:14.997 at the end of the day, just under a second faster than what I had achieved a few years ago in my Mazda 2 with a much more focused configuration.

I had no intention of registering for this event, or even participating in the Bimmer Challenge, a SoCal-based BMW timed attack series. But my buddy Rob (the previous owner of the 128i) mentioned that he signed up with his E92 M3 – didn’t want to miss that meet session. Also, I love Buttonwillow’s 13CW setup and haven’t ripped it in over a year, so a visit was definitely in order.

Strong brake pads are a must

One of the biggest changes to my car was the brakes. Last time I was on the track at Streets of Willow, I forgot to trade in my street-level Hawk HPS pads for more track-focused fare. This turned out to be a big mistake. The HPS gear held up well but didn’t have the confidence or repeated ride endurance of a more aggressive compound, like the HP Plus pads that came with the 128i when I bought it. I took the time to upgrade to the HP Plus kit on the front axle the night before, and it improved performance dramatically.

The car felt so much more confident under braking and allowed for much shorter stopping distances. Braking from 103mph to 55mph (I could turn faster, but I’m still learning the car) for Buttonwillow’s final Sunset corner was a breeze lap after lap, and good modulation allowed for a balance of effortless weight. There are more potent trail-focused compounds with even better modulation, like the G-Loc R10s I had on my Mazda 2, but free-ninety-nine is free-ninety-nine. The Hawks only started giving up once I started to shorten my already very short stopping distances later in each session, which is a lot to ask of any pad compound. I think some non-pad upgrades, like air channeling to help keep the pads at the perfect temperature, might be in the cards as a future mod.

I didn’t bother to do a shock adjustment

I originally thought I would try my hand at minor shock tuning, as my Koni Yellow shocks have adjustable rebound. Rebound is the rate at which the shock rebounds to its full stroke after a bump. All four of mine are set to all soft, so the 128i rides comfortably in all scenarios, but body roll is definitely amplified at trail speeds.

However, it turned out to be a good setup for Buttonwillow, especially since the best line to follow is his generous amount of brakes. This includes jumping off the inside curb at the bus stop, in the middle of the circuit, which then ensures a good speed into Riverside, which is the next complex of long sweepers. Keeping the shocks comfortable meant that working on the pavements didn’t upset the chassis in any way, they simply absorbed it.

The car was generally neutral, but I felt I lacked spin in certain sections when I started to accelerate. This happened at Sunrise, On Ramp and Sweeper, which are three crucial corners. So I’m going to heed the advice given by reviewers in my first track blog and tighten up the front and rear shocks, but the rears more to help the rear turn.

Body roll wasn’t bad, and I stayed planted in my M Sport seat thanks to a street-legal Schroth QuickFit harness, but a little less body roll would be nice. Still, for the Koni Yellows and very street-friendly Eibach Pro-Kit springs, the 128’s on-trail qualities were pretty good.

It was great to be there

One of the biggest chapters of American touring car racing was the early 2010s Grand-Am series, now the International Motorsport Sports Association (IMSA), Continental Tire Sports Car Challenge (CTSCC) series. That’s mostly down to all of its epic naturally aspirated front-wheel-drive versus rear-wheel-drive on-track action. Like the eighth and ninth generation Honda Civic Si versus the BMW 128i, for example.

My participation in this track day in my own street-ready BMW 128i turned out to be something of an informal homage to the CTSCC, as I found myself hanging out with a deftly driven eighth-generation Si through the fun 3-track circuit. .1 mile to Buttonwillow Raceway Park for a few laps. I included some of that in the video above – this cat was great fun to follow and definitely got me motivated to drive faster.

I reached a new personal best and won equipment

It felt good to reset my personal best lap in a car that I’m still mastering, even if it’s not as focused as my old Mazda 2. The 2 had a bunch of interior components removed, a racing seat lightweight, better tires, and I set the time for early winter when Buttonwillow enjoys cool ambient temperatures. This time in 1st I was on much worse tires mounted on a less familiar chassis with an ambient temperature of 105 degrees. I’m excited to get more and more familiar with the chassis, possibly put on better tires, make some tweaks, and hopefully lose a few more seconds in late fall or early winter. winter. I would love a sub-2:10.XXX.

Earlier today, a 2:15.996 lap I did was enough for third place in the Bimmer Challenge class B4. I believe the cutoff for lap times was the midday break for lunch, as usually most people don’t waste any more time due to high track temperature and ambient temperature afterwards. In fact, many people leave after lunch due to the draconian heat of the Central Valley. However, there is a big caveat to my conclusion: because it was an extremely hot summer day, many of the heavy hitters in the series who normally face each other in B4 were not present. Still, it was great to win a trophy, which I haven’t done since, like, sophomore softball.

All in all a great trail tour. I was also happy to offer some insight and encouragement to Rob too – he lost his personal best by over seven seconds! I’m happy to be making progress, and hope some brake work, a bit of coding, a re-alignment after riding kerbs all day, and some light damper tweaks will yield more success on my next visit. Let’s hope it’s a little cooler outside too, because driving on the track in 105-degree heat isn’t the most comfortable activity.

Learn more about this BMW 128i