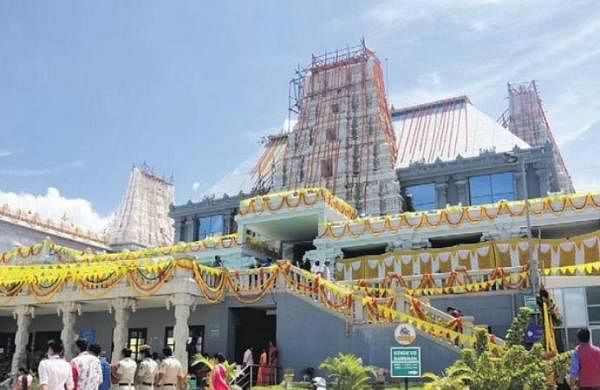 Speaking on the occasion, Kovind said that ISKCON Bengaluru has made a positive difference in the lives of thousands of people over the past 25 years. ISKCON’s Akshaya Patra initiative provides fresh, nutritious midday meals to more than 18,000 children in public schools across the country every day. “During the pandemic, Akshaya Patra and her supporting organizations have also provided over 25 crores worth of meals to people in distress. Such humanitarian interventions have benefited all sections of society,” the president said.

Madhu Pandit Dasa, president of ISKCON Bengaluru, said the temple was inspired by Srila Prabhupada’s desire to build a big temple like Tirumala. Chanchalapathi Dasa, senior vice president of ISKCON Bengaluru, said the temple will be open to the public from August 1 and a large queuing hall, where around 5,000 devotees can comfortably wait for darshana, will be available. “A large nitya annadana hall will benefit all pilgrims with free meals.

The campus will also provide spiritual and cultural education to children, youth and families,” he said. Further, he said that Rs 105 crore has been spent so far on phase 1 of the project and a unique theme park “Krishna Leela” will be established in phase 2. Governor Thaawarchand Gehlot and Minister in Chief Basavaraj Bommai were present.

DRAVIDIAN STYLE OF ARCHITECTUREE
The stone temple is built according to the traditional Shilpa Shastras in the Dravidian architectural style. The design and aesthetics, including the seven gates of the shrine, are inspired by the Sri Venkateshwara Swamy Temple in Tirumala. The deity of Lord Srinivasa is almost the same size and was named Sri Rajadhiraja Govinda.